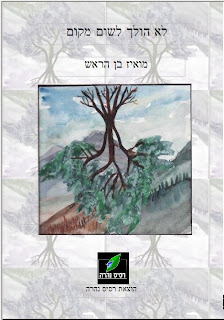 Sometime in 2008 my friend Pavel from Ashan Hazman (Note, link in Hebrew, it's a really cool bookshop + Pub + Bar + Rock concert place in Beer Sheva), told me that the poet Mois Benarroch was trying for years to publish a poetry book, but no publisher wanted to take it.
I said I'd be glad to do it. I like the guy's poetry, and I thought that it was turned down by other publishers for spurious reasons.
Like anything else in publishing, it took a longer time than we thought, and it ended up costing more money (though compared to the two books I published just before that, it was relatively cheap).
We ended up publishing it in late 2010, the cover designed by yours truly (I did not do the painting, and I think the cover design is pretty awful...)
We never sold too many copies, but never mind, the guy deserved to be published.
Then earlier this week it was announced officially that the book won the Yehuda Amichai prize for poetry in 2012. I was ecstatic. this one will go down in history. Though I have to wander if that also means it's going to sell better...
PS. just to show you that this did not go to my head, I promise to go back to windows 95 games next week. (Al, sorry for the delay, I hope you understand...)
Posted by אורי מאיר at 4:41 PM